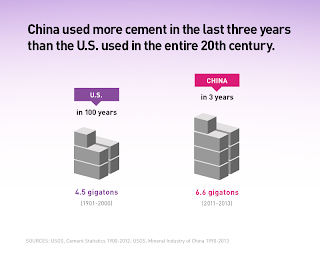 When I visited Bath Iron Works (BIW) shipyards in Bath, Maine many years ago as a Navy employee, it became very clear to me what China was doing. This was before the independently owned shipyards were bought out by the giant DoD industrial companies. BIW had a new heavy-lift crane system to move parts of ships (Navy warships) around for assembly. You can see the type of crane I'm referring to in the picture on the home page of the previous link. That crane had been made in China. As the guide told us, ALL of their previous cranes had come from a company in Germany because they were the best in the world at it, and one of the few that produced the types of cranes BIW needed. But this company in China had gotten into the business and was making them 'good enough' - and the price was much better.

Here's what I realized. As a communist country, they basically have a slave force of over a billion people. It doesn't matter that the "middle class" is growing there; there are still millions upon millions that live in poverty as compared to the United States or Western Europe. The government there can set wages as low as they want, steal as much corporate technology and information as they can, reverse engineer all sorts of things, and use all of those factors to enter a market. Once they do, it is guaranteed that their product will be cheaper. And if it is "good enough" it will begin to take the market away from established companies in those fields. Regarding the "global economy," this will devastate many existing Western world businesses as consumers seek ever cheaper products as those fixed things they have to pay for - like food and fuel - climb ever higher (usually due to liberal governments' interference with the capitalistic markets). The "first world" nations are basically competing with a "third world" nation. China's employees work in conditions that were similar to those in the Western world at the end of the 1800s and early 1900s. Their salaries are similar as well. Nations that are a hundred years beyond that in terms of income, standard of living, and all of those other factors simply CANNOT compete when the driving factor for so many products is price. China, and to a lesser degree the other Asian countries, will always be able to undercut us on price.

Until we level this playing field, the disparity between Western nations and China regarding imports and exports will only get worse - and our economy will only continue to suffer.