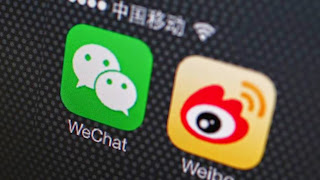 For the past four years, China’s government and its far-reaching bureaucracy have embarked on a campaign to take back China’s weibo microblog scene from the masses, who have been using social media services to expose corrupt officials, circulate news, and air their opinions.  And it’s working. According to a new study by media researchers based in China and the US, the government’s 176,000 microblogs are trying to control much of the discussion online, by offering official interpretations of public events, while contrary views are ruthlessly deleted by Great Firewall censors.

In the latest government maneuver, China released new restrictive regulations today seemingly aimed at Tencent’s popular WeChat chat service,…New users will also have to provide their real names and sign a contract promising they will “obey the law and respect the socialist system.”

only news from accredited media outlets are allowed.

It’s a dispiriting development for those who once had high hopes for social media’s ability to empower the Chinese public. (Former US president Bill Clinton once said that trying to control the internet in China was like “trying to nail Jell-O to the wall.”)

…once again proving the liberal politicians simply do not understand the real world, and having them in charge of our country only does long-term damage.