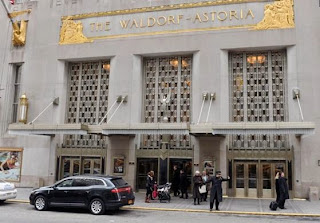 The sale of the Waldorf Astoria to a Chinese insurance giant is really bugging the State Department. Grand plans by Beijing-based Anbang Insurance Group "to restore the property to its historic grandeur" has some Washington diplomatic and security insiders wondering if the Chinese will be adding more than a view to kill for.

Officials said Monday they are reviewing the sale -- and implied the glittering renovation scheme for the iconic Park Ave. hotel may mask a nefarious purpose: espionage. "We are currently in the process of reviewing the details of the sale and the company's long-term plans for the facility," said Kurtis Cooper, a spokesman for the U.S. Mission to the United Nations. The State Department said it may end a 50-year practice of leasing a residence at the hotel for the U.S. ambassador to the UN. Also at stake is the department's rental of two floors of the Waldorf during the annual UN General Assembly.

Anbang, which bought the Waldorf from Hilton Worldwide, is reportedly linked to China's Communist Party, which has overseen a massive effort to use cyberspying to steal U.S. trade and military secrets.

The State Department regularly reminds U.S. diplomats who go to China that they are likely to face surveillance and tells American citizens who travel to China that someone might be listening in their hotel rooms.