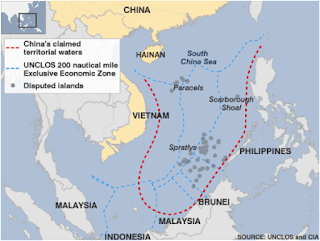 It doesn't matter whose it is, where it is, or anything like that - as long
as they can take it and they want it, they will. Who is going to stop them?
Certainly not the U.S. with its current leadership. By the time it really
matters, it will be far too late. It is very possible to see China and
Russia joining forces, and with their resources and labor (neither of them
will have no qualms about killing their own people to accomplish their
tyrannical leaderships' goals - see history) they will be VERY difficult to
stop.

"Reuters earlier reported on China's boosted activities in the Spratly
Islands. Reuters reports this includes the construction of a runway, which
could be used to help the Chinese military carry out "sustained operations"
in the region. The runway reportedly could be used as an alternative to the
country's only aircraft carrier.

The runway, though, is just part of China's unusual and alarming "land
reclamation" project. Earlier this year, the U.S. military called the
project "extensive," involving China "pumping sand on to live coral reefs"
and then paving over them with concrete."