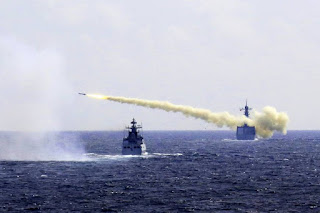 They keep ramping up their war capability.

" China has ramped up its military and coast guard activity in the waters in
recent months, with the Japanese Defense Ministry reporting early last month
that fighter jets had been scrambled a record 199 times between April and
June in response to Chinese aircraft approaching Japanese airspace. ... In
the South China Sea, where Beijing is embroiled in bitter disputes with some
of its neighbors, China announced last week that it would hold joint naval
drills with Russia in September."