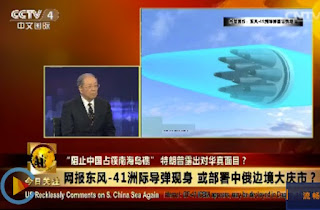 They test more missiles each year than most other countries - combined.

" The Chinese state television channel CCTV-4 last week broadcast nuclear
threats, including graphics showing new DF-41 missiles deployed in northern
China and graphics showing the missiles' strike path into the United States.
The Jan. 25 broadcast included a graphic of a 10-warhead MIRV bus for the
DF-41. The Chinese Communist Party propaganda newspaper Global Times, known
for its anti-U.S. stance, issued stark calls for China to build up its
nuclear arsenal for use against the United States. On Jan. 24, the newspaper
said China's strategic forces "must be so strong that no country would dare
launch a military showdown."

"China must procure a level of strategic military strength that will force
the U.S. to respect it," the newspaper said.

The same state-run organ criticized President Donald Trump in an article on
Dec. 8 and said China should use its wealth "to build more strategic nuclear
arms and accelerate the deployment of the DF-41 intercontinental ballistic
missile."