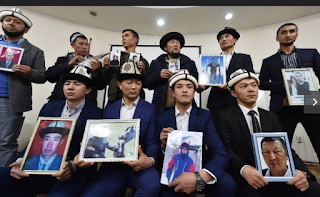 The "study camp" is believed to be one of the numerous extra-judicial detention centres set up in Xinjiang, holding as many as one million Uighurs and other Muslim minorities, according to estimates cited by a UN panel.Doolotkhan's disappearance shows how China's vast dragnet has extended and now hits people with links to Kyrgyzstan, after similar reports emerged from distressed families in neighbouring Kazakhstan.Last month Alymkulova and a dozen others formed a lobby group, called the Committee to Protect the Kyrgyz People in China.The group has called for the Kyrgyz government, which depends heavily on Chinese economic assistance, to press Beijing about the camps in Xinjiang.Chinese officials have described the camps as "vocational education centres" for people who appear to be drawn towards Islamist extremism and separatism.But human rights activists say members of China's Muslim minorities are being held involuntarily for transgressions such as wearing long beards and face veils.Rights groups say the region has become a police state.