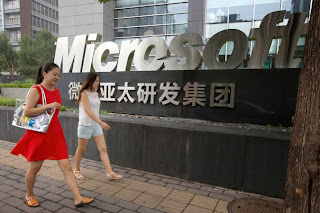 China – they'll get information any way they can.  They'll use their own regulators, agencies… whatever it takes!

"In what Microsoft characterized internally as "surprise visits," the agents from China's State Administration for Industry and Commerce interrogated a company vice president and other senior managers, copied contracts and financial records, and downloaded large amounts of data from the company's computer servers, including emails and other internal communications.

The swoop on Microsoft stood out for its scale, but it was just one of dozens of similar actions across China recently that have set off alarm in boardrooms across the globe. Chinese regulators appear to be energetically expanding enforcement of the antimonopoly law, and foreign companies fear that they could become easy targets for officials from an array of competing agencies and local governments aiming to impress President Xi Jinping, the Communist Party leader who has promoted visions of patriotic resurgence and technological pre-eminence."

"China's not moving towards a free market, but it's moving towards a wider palette of regulatory tools," Mr. Kennedy said. "These aren't meant to create a level playing field; they obviously want the field to be slanted..."