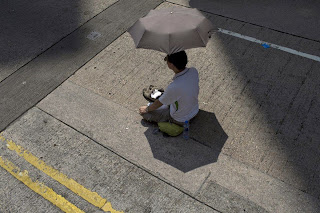 "We can't accept the Hong Kong police becoming the Gong An," it reads - a reference to China's feared Public Security Bureau, which enjoys virtually unfettered powers on the mainland.

As tens of thousands of protesters gather for a sixth day, their demand for the right to choose their leaders in fully democratic elections poses the biggest popular challenge to the ruling Communist Party since Chinese president Xi Jinping took power two years ago. The Umbrella Revolution, so called for the protesters' use of umbrellas to shield against pepper spray, comes at an inopportune time for Xi. He is trying to steer a slowing economy while moving against powerful vested interests in one of the most wide-ranging purges and anti-corruption campaigns since the Communists came to power in 1949.

At the forefront of this challenge is student leader is Joshua Wong Chifung...In the High Court on Sunday evening, Justice Patrick Li Hon-leung ordered Wong's immediate release, granting a writ of habeas corpus, one of the British-implemented protections that Hong Kong inherited from its former colonial master. Wong would have no such protection on the mainland where an equivalent right doesn't exist and where protest leaders are often beaten and routinely detained for long periods without trial.

While leaders in Hong Kong consult with Beijing on how best to clear the streets, the student-dominated protests will be an unnerving reminder for Xi and other top party leaders of the Tiananmen Square demonstrations 25 years ago, in June 1989.