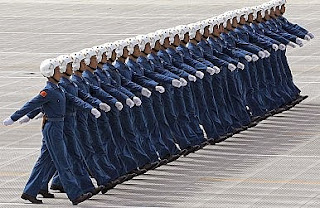 IISS concluded that the gap between Asian and Western military spending continued to narrow as Asia's defense spending rose while most of the Western countries cut defense spending. "In Asia, the growth of defense budgets is accelerating and military procurements are rising," IISS said in a press release. "The shift in the global distribution of military power towards Asia, highlighted by the IISS in recent years, has continued."
In the report, IISS noted that real defense spending is not only on the rise in the Asia-Pacific, but its growth rate has been in accelerating in recent years.
Although most countries in the region are spending more on defense, the report found that the growth in China's defense spending far outpaces that of its neighbors in absolute terms. Indeed, growth in China's military spending in 2013 accounted for 46 percent of the total growth in the entire region.
Read more: http://thediplomat.com/2014/02/chinas-military-spending-vs-asias-military-spending/