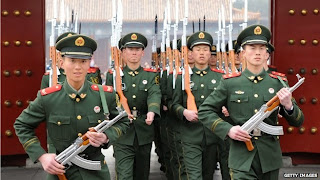 
China, the next most highly ranked player, spent some $112bn in the same period, though there are complex debates about how far Beijing's figures encompass all of its defence-related spending.


But spending alone is a crude indicator of military capability.

What does money actually buy you? How much funding, for example, goes on salaries and the housing of large conscript armies? What about a country's willingness to use force?
Broad trends, though, can be identified and this year's Military Balance shows the continuing growth of China's military machine.

And China's rise is driving defence expenditure elsewhere in the region. Defence spending in Asia is up by 23% since 2010.

China has ambitions to become a major maritime power. China now spends about three times as much as India on defence and more than neighbouring Japan, South Korea, Taiwan and Vietnam combined.