State Dept. contractor allegedly paid by Chinese agent to spy on Americans – yet no charges filed 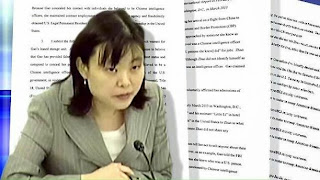 And look, the contractor is ALSO Chinese.

Newly unsealed court documents obtained by Fox News show a State Department
contractor allegedly was paid thousands by an individual thought to be a
Chinese agent in exchange for information on Americans -- but despite an FBI
probe, the Justice Department declined to prosecute. A November 2014 FBI
affidavit, filed in the U.S. District Court for the District of Maryland,
shows the bureau investigated the contractor for her admitted contact with
individuals she believed to be Chinese intelligence officers.

The affidavit from agent Timothy S. Pappa states the translator, Xiaoming
Gao, was paid "thousands of dollars to provide information on U.S. persons
and a U.S. government employee." According to the documents, she admitted
these meetings took place in hotel rooms in China for years, where she
reported on her "social contacts" in the U.S. to an individual who went by
the name of "Teacher Zhao." The detailed affidavit even goes on to say the
translator briefly lived, "for free," with a State Department employee --
who held a top-secret clearance and designed high-security embassies,
including the U.S. compound in Islamabad, Pakistan.