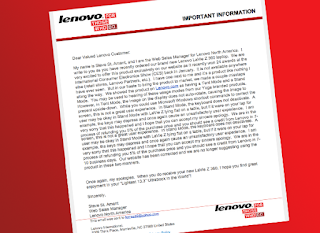 "The letter, which CR received by e-mail, explained that Lenovo had made "a couple missteps" in its "haste to bring the product to market." Apparently, when the computer is used in tent mode, the display doesn't auto-rotate. Yep, that means you'd see an upside-down image. The letter explained that you could use Windows commands to fix that, but that "this is not a great user experience."
And that's not all, Lenovo continued. In stand mode, the keyboard doesn't automatically deactivate. "A user may be okay in Stand Mode with LaVie Z lying flat on a table, but if it were on your lap for example, the keys may depress and once again cause an unsatisfactory user experience." Yes, we agree: That would be unsatisfactory.

In the letter, Lenovo says it has updated its website, and indeed the specs for the LaVie Z 360 now talk only about tablet and laptop modes. But it's too late for anyone who already bought the LaVie with greater expectations."