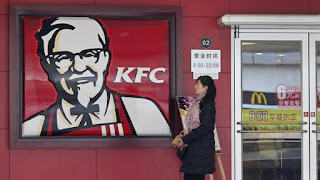 KFC's China CEO Qu Cuirong said in a statement that it was hard for
companies to protect their brands against rumours because of the
difficulties in collecting evidence. "But the stepped-up efforts by the
government in recent years to purify the online environment, as well as some
judicial interpretations, have offered us confidence and weapons," she said.

The companies being sued were named as Shanxi Weilukuang Technology Company
Ltd., Taiyuan Zero Point Technology Company and Yingchenanzhi Success and
Culture Communication Ltd. in Shenzhen city. Calls to numbers listed for the
companies either rang unanswered or were not valid.