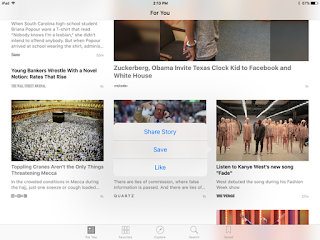 Apple's impressive rise in China isn't coming without some sacrifice, as
visitors are discovering that the Apple News app doesn't work on the
country's networks.

Although Apple News is only available for U.S. customers at the moment, the
New York Times reports that users can still access the app while traveling
overseas. One exception is in China, where users get an error message saying
the app isn't supported.

The blocking of Apple News underscores the dilemma U.S. companies face when
trying to lure the potentially lucrative Chinese market. A principled stand
against censorship would be difficult for Apple, which drew 27 percent of
its net income from China last quarter, but would also be arguably unfair
for Chinese citizens who increasingly want to use Apple products.