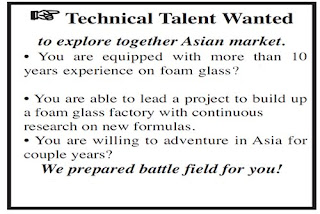 " Ji Li Huang and Xiao Guang Qi were charged with trying to buy trade
secrets of a Pittsburgh Corning plant in Sedalia for the purpose of opening
a competing plant in China, according to a release from the U.S. Attorney's
Office for the Western District of Missouri.

After having a request to tour the Sedalia FOAMGLAS plant denied, he met
with a plant employee and later trespassed at the plant to allegedly record
video or photos on a cell phone.

On July 22, an ad in a Sedalia-area newspaper sought "technical talent" with
experience at Pittsburgh Corning to build a foam glass factory in Asia."