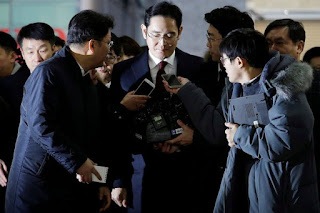 This is not China, but there seems to be a similar thread throughout much of
the Asian world. I'm reminded of the Klingon race - constantly bellowing
about duty and honor, but behind the scenes the most un-honorable race.

"The sprawling investigation into President Park Geun-hye of South Korea
took a dramatic turn on Monday with word that prosecutors were seeking the
arrest of the de facto head of Samsung, one of the world's largest
conglomerates, on charges that he bribed the president and her secretive
confidante. [.]

Mr. Lee is accused of instructing Samsung subsidiaries to make payments
totaling 43 billion won ($36 million) to the family of Ms. Park's
confidante, Choi Soon-sil, and to two foundations that Ms. Choi controlled,
in exchange for help from Ms. Park in facilitating a father-to-son transfer
of ownership control of Samsung."