Illegal Clinton fundraiser made tape fearing for his life 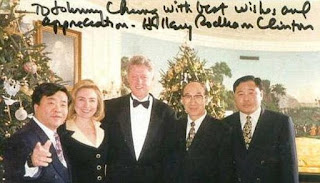 Not a surprise that these American communists would be in bed with Chinese
communists.

"A Chinese-American businessman at the center of a Clinton campaign finance
scandal secretly filmed a tell-all video as an 'insurance policy' - because
he feared being murdered. In footage provided exclusively to DailyMail.com,
Johnny Chung spills details on how he illegally funneled money from Chinese
officials to Bill Clinton's 1996 re-election bid."