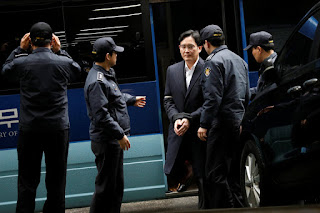 The focus here is on China, but there is an inherent issue in the Asian
countries where Judeo-Christian foundations aren't present.

The head of Samsung, one of the world's largest conglomerates, was indicted
on bribery and embezzlement charges on Tuesday, becoming one of the most
prominent business tycoons ever to face trial in South Korea.

The indictment of Lee Jae-yong, the company's de facto leader, came at the
end of a special prosecutor's 90-day investigation of a corruption scandal
that has already led to the impeachment of President Park Geun-hye.