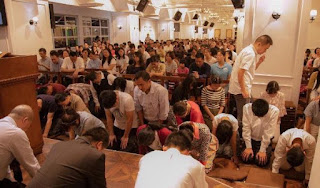 Human rights abuses in a "modern" country like China are not only present,
but are escalating! They are like India in many ways. The more that
American & other western nation companies continue to fund this tyrannical
government by producing product there, and buying billions from them, the
more power that evil government has. Americans and all of the western world
are complicit. China needs to be treated like North Korea and ostracized
until they can act civil. But it seems that when the almighty dollar is
most important, most humans (governments included) will turn the other way.
The "global economy" has many benefits, but also many, many bad side
effects. When we get so entangled economically, we lose the leverage we
should have to force them to improve.

"the crackdown represented a major escalation of religious persecution in
China. According to Fu, there were more than 10,000 cases of detention of
Christians this year, compared with just over 3,000 cases for the whole of
last year. In September, Beijing police closed the Zion Church, one of the
largest Protestant churches in China with more than 1,500 regular
church-goers.

the Religious Affairs Regulation was amended to give grass-roots officials
more power to act against churches and impose tougher penalties for
"unauthorised religious gatherings... churches have been shut down or even
demolished, and their members told to denounce their faith. "This round of
crackdown is unusual as it seems that the authorities want to close the
church down for good. Our social media channel accounts such as WeChat were
not closed in previous rounds and they have taken a large number of our
members into custody this time."

So, what is so scary about Christianity to the Chinese communist government?
Oh, is it the fact that the truth shines a light on all of the evil that
country's leaders do to suppress its people?