This Holiday, a Flurry of Church Arrests 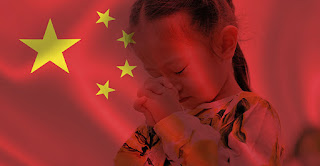 This is the same country that the western world is funding to the tune of billions every year because of the manufacturing we do there, the buying we do from there, etc. And in reality, they really should be treated like North Korea and ostracized. That's the problem with a global economy - too many deep ties and we let the money control our morality.

"Dozens of Christians were grabbed from their homes in a series of raids sweeping across the Sichuan area late last night. Some elders were able to escape into hiding. Others were less fortunate. Zhang Guoqing, assistant deacon of the church, said he was released from custody and went straight to Pastor Wang Yi's home -- "but the pastor and his wife were nowhere to be found." The home, a ransacked mess, is just another indication that China's latest crackdown is something everyone -- including the international community -- needs to take seriously.

Started at 9 p.m., social media channels, cell phone discussions, and personal accounts were all blocked. Even the church's telephone line was cut. One church leader is being watched "around the clock by 'security personnel' in his home." The ferocity of the attack surprised a lot of Christians, who've been operating out in the open for years. "This round of crackdown is unusual," said Li Yingqiang, "as it seems that the authorities want to close the church down for good. Our social media channel accounts such as WeChat were not closed in previous rounds and they have taken a large number of our members into custody this time. The scale was unprecedented."