Anyone in our government that has trust for the officials, or companies, or any group in this country is living in a blind reality. We need to cut ties with this country, which will stop funding them to build up a huge military, and seriously stifle their growth. 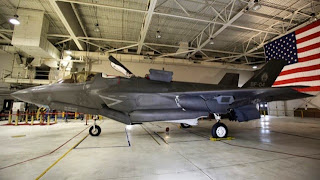 A cyber espionage operation by China seven years ago produced sensitive technology and aircraft secrets that were incorporated into the latest version of China's new J-20 stealth fighter jet, according to U.S. officials and private defense analysts.  The Chinese cyber spying against the Lockheed Martin F-35 Lightning II took place in 2007 under what U.S. intelligence agencies codenamed Operation Byzantine Hades, a large-scale, multi-year cyber program that targeted governments and industry.

Defense officials said the stolen data was obtained by a Chinese military unit called a Technical Reconnaissance Bureau in the Chengdu province. The data was then passed to the state-run Aviation Industry Corp. of China (AVIC).  An AVIC subsidiary, the Chengdu Aircraft Industry Group, used the stolen data in building the J-20, said defense and intelligence officials familiar with reports of the illicit tech transfer.