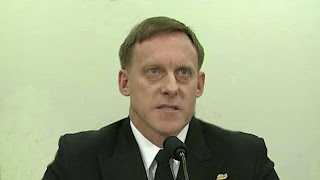 The head of the NSA issued a blunt warning Thursday to lawmakers: China can
shut down the United States.

The grim forecast came from Admiral Michael Rogers, the director of the
National Security Agency and commander of the U.S .Cyber Command.

Rogers said he believed China along with "one or two" other countries had
the capability to successfully launch a cyber-attack that could shut down
the electric grid in parts of the United States.