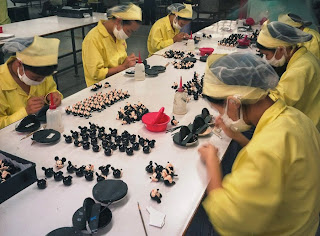 CLW's investigation confirmed that the factories produce for some of the
largest toy brand companies in the world: Mattel and Fisher-Price, Disney,
Hasbro, and Crayola, including famous toy brands like Barbie, Mickey Mouse,
Transformers' Optimus Prime, and Thomas the Tank Engine. According to
company information, the factories also produce toys for other major toy
companies and retailers likes Target, Kid Galaxy, Spinmaster, Kids II, Tomy
IFI, and others.

CLW's 2014 investigation once again uncovered a long list of labor rights
violations, most of which existed in toy supplier factories in 2007,
suggesting that over the past seven years, the state of labor conditions in
the toy manufacturing industry has failed to improve. And relative to other
industries, conditions may even be deteriorating.

Intense business competition and demand for cheap products drives toy
companies to suppress manufacturing prices. Toy sellers, especially
international brand companies, have largely moved their manufacturing base
from their home countries to developing countries in Asia and Latin America
to utilize cheap labor. In order to mitigate investment risk, instead of
building their own factories in these regions, toy companies often contract
their manufacturing to local factories via intermediary supply chain firms.
Supplier factories have little choice but to accept the production price put
forward by the toy company. Sometimes, in order to receive the business,
factories will even reduce the cost further. But toy companies maintain
strict demands on material and product quality, so labor costs ultimately
become the only flexible factor. Workers, situated at the bottom of this
system, are forced to bear the cost.

Multinationals are keen to benefit from this system. While it reduces their
investment risk, it also enables them to distance themselves from factories
that act in unethical or illegal ways. The multinationals that do not
directly employ workers making their products often rely on this fact when
blaming factories for poor or illegal labor conditions.

Many toy companies divide their toy orders among dozens or hundreds of
factories in order to ensure that their orders in any given factory only
consists of a small proportion of that factory's total orders-usually no
more than 20 percent. Toy companies will also use this as a basis for
avoiding responsibility for poor labor conditions. For example, if CLW
uncovers labor rights violations at a Disney supplier factory in China,
Disney might respond that it only maintains a small number of orders in the
plant and is unable to influence the factory's behavior.