I bought a fake Apple Watch for $27 at CES 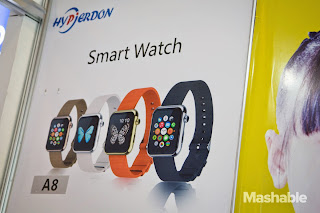 In the back of one of the smaller halls at CES, a Chinese company was
showing off fake Apple Watches.

The watch, created by Shenzhen-based Hyperdon is actually called "Smart
Watch," and it almost looks like the real deal - at least, upon first
glance.

The watch's screen only displays when it's turned on, and many of its icons
are blatant ripoffs of Apple designs.

Needless to say, the whole thing was more than a little suspicious. I had to
pay cash, and when I returned from the ATM, the representative told me the
watch's price was actually $30 - not $27 as she said earlier.

The representative, who did not remove her sunglasses the entire time we
spoke, told me that Hyperdon sells its products at retail stores in the U.S
and China, but did not elaborate on locations or types of stores.