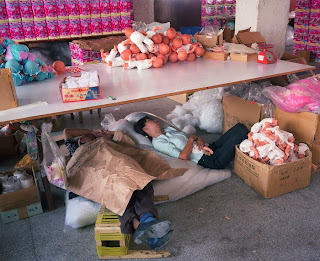 How did it get like this? Before opening up its economy in the late '70s,
the Chinese government issued tight control between rural and urban areas,
which encouraged people to migrate to cities illegally. According to War On
Want, "These controls were part of the permit (hukou) system, in which
welfare entitlements such as pensions, housing, health, and education were
tied to a person's place of birth."

But as China moved toward a market economy, cheap rural labor became
integral to the country's growth [and how they can undercut ANY industry in
the world and in the process make those other companies suffer around the
world - basically, slave labor within a capitalist system]. The limitations
on migration were reduced and about 85 percent of China's rural poor flocked
to the cities in search of employment.

However, the restrictions on household registration of the hukou remained as
rigid as ever. Migrant workers [within their OWN country, not crossing
borders - NO parallels with Mexico and the U.S.] became unable to access
state benefits or protection, despite Chinese laws promising "equal rights"
for all.

They became outcasts in the eyes of their government. That's approximately
150 million migrant workers who are completely unprotected. They endure
poor working conditions such as excessive and forced overtime, yet they
don't even have basic social security benefits or employment contracts.

The workers' lack of awareness of their own rights and the Chinese
government's unwillingness to address the abuse only perpetuate the system
of inequality.