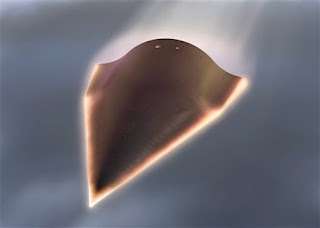 China recently conducted the second flight test of a new, ultra-high-speed missile that is part of what analysts say is Beijing's global system of attack weapons capable of striking the United States with nuclear warheads.

The first flight test of the Wu-14 took place Jan. 9 and flew at speeds of around Mach 10, or 10 times the speed of sound—around 7,680 miles per hour. Hypersonic speeds pose severe guidance and control challenges for weapons engineers and produce extreme stress to metal and components.
The Chinese hypersonic test is further evidence of what is viewed in intelligence circles as an emerging hypersonic arms race. In addition to China, the United States, Russia and India are building high-technology hypersonic strategic arms. The weapons are sought for their hard-to-counter features and ability to defeat strategic missile defenses.

"This [January] test serves as a sign of China moving towards longer range, stronger retaliatory and potentially preemptive capability," Saalman said, adding that the capability "could propel China from what has historically been a more reactive posture to a more active one."
Fisher said for the United States, the options for responding to the new strategic weapon are stark. The Pentagon should accelerate investments in both deterrent and defensive capabilities, he said.