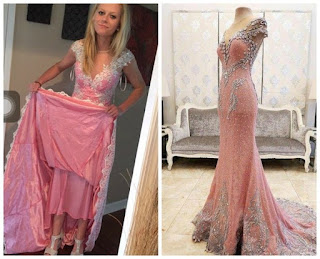 "This is why you don't order from China!" tweeted one Alabama teen after she
received a prom dress that was, well, not what she was expecting.

She later tweeted about the dress debacle, saying it looked like "a quilt
with arm holes. The material - you couldn't even use it as a bedsheet,
that's how cheap it was."

A representative messaged her back and said they'd need to see pictures
before they decided whether she would get a refund. She's tried several
times - and from several different computers - to upload pictures, but the
site gives her an error message every time.


The gown Alivia Briggs thought she was buying is featured on designer Mak Tumang's Instagram page. And if you look at his other gowns, it's very much in his style. Fascinating! This was definitely a "buyer beware" situation.
https://www.instagram.com/maktumang/?hl=en