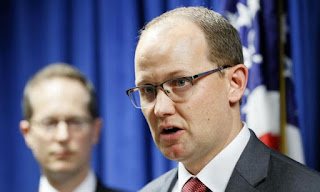 A spy for the Chinese ministry of state security has been arrested and
indicted on charges of economic espionage and attempting to steal trade
secrets from several US aviation and aerospace companies, according to the
justice department.

Yanjun Xu, a deputy division director for the ministry's Jiangsu state
security department, is accused of targeting several aerospace companies,
including GE Aviation, a subsidiary of General Electric Co, the justice
department said in a statement.