The Big Hack: How China Used a Tiny Chip to Infiltrate U.S. Companies 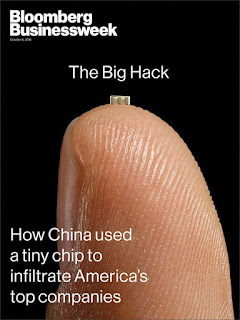 " Nested on the servers' motherboards, the testers found a tiny microchip,
not much bigger than a grain of rice, that wasn't part of the boards'
original design. Amazon reported the discovery to U.S. authorities, sending
a shudder through the intelligence community. Elemental's servers could be
found in Department of Defense data centers, the CIA's drone operations, and
the onboard networks of Navy warships. And Elemental was just one of
hundreds of Supermicro customers.

During the ensuing top-secret probe, which remains open more than three
years later, investigators determined that the chips allowed the attackers
to create a stealth doorway into any network that included the altered
machines. Multiple people familiar with the matter say investigators found
that the chips had been inserted at factories run by manufacturing
subcontractors in China."