"They are forced to renounce the Muslim religion and Uighur language, and memorize and recite Chinese characters and propaganda songs. The 'vocational training' is actually forced labor. Torture and deaths are common. Thousands of children have been separated from their parents and placed in a separate network of orphanages. 'Break their lineage, break their roots, break their connections and break their origins," concluded a state news commentary cited by the [New York] Times. It's hard to read that as anything other than a declaration of genocidal intent."

Uighurs, who are being swept up into China's nets by the thousands at various checkpoints around the country, are scared to even leave the house. Other non-Muslims are being thrown behind the high walls of these prisons for nothing more than having a photo of a woman with a headscarf on their phone -- or reciting something religious at a funeral. "Yet thanks to China's growing power," the editors of the Washington Post point out, "global reaction has been muted." 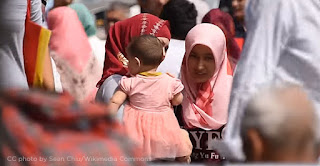