Prague mayor: Why we fly the Tibetan flag over City Hall 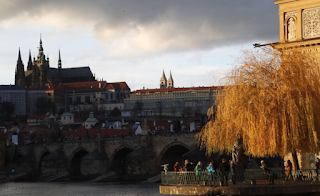 His advice is wrong though - they SHOULD severe economic ties with China."The reason for Beijing's decision to rescind the invitations was clear. Since I was elected mayor of the Czech capital in 2018, I have worked to fulfill a promise to voters. I vowed during the campaign that I would return to our hallowed post-communist traditions of honoring democracy and human rights. By delivering on that promise, I and my government have prompted the ire of the Chinese Communist Party.We have chosen to adorn our city hall with the Tibetan flag — which should not bother China at all, considering that its 1951 agreement with the Tibetan government grants the territory a broad degree of autonomy. Being a doctor, I have also publicly condemned the forced extraction of organs from members of the Muslim Uighur minority and other prisoners of the regime."